Integrative modeling of nucleic acids and proteins. Development of coarse-grained force fields to study folding, assembly and flexibility of biomolecules of complex architecture.

My research focuses on three axes at the interface between physics, biology and computer science.

Development of the coarse-grained force fields for nucleic acids HiRE-RNA/DNA.

The study of non-coding RNA has been a very active area of research in recent years, as new functions of RNAs were reported. In order to perform their correct biological activities, RNA molecules must adopt one or more specific three-dimensional structures, and the equilibrium between the various possible configurations is regulated mainly by thermal fluctuations, pH, ionic conditions, and the presence of ligands. Despite advances in experimental methods, many questions remain open concerning the structure, the dynamics and thermodynamics of these molecules. As a first step, understanding how non-coding RNA works implies being able to determine its tertiary structure and understanding how the molecule adapts to the changes of the environment. Computer studies can complement the experimental information, but they are limited by the size of the systems and by the time-scales characteristic of the processes. In recent years, new coarse-grained models allow to simulate these molecules. Among them we have developed HiRE-RNA/DNA to study RNA folding and DNA assembly. With this model we have been able predict folding of RNA molecules of complex architectures up to sizes of 50 nucleotides from sequence only, and of structures of larger systems when coupled to limited or low-resolution experimental data. The unique feature of the model is to account for a large set of non-canonical base pairs which are crucial for many RNA and single stranded DNA structures, such as G-quadruplexes. 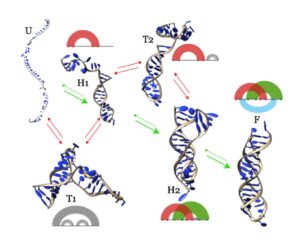 – Development of interactive simulation techniques to enhance sampling of the biomolecule’s conformational space.

Conformational sampling of biomolecules constitutes a major bottleneck in computer studies. These systems are typically too large to be explored exhaustively, even with the most advanced computer architectures and with long simulation times. Various enhanced sampling techniques are routinely used to access molecular conformations significantly different from one another, including Replica Exchange molecular dynamics, Simulated Tempering, where temperature is used to overcome the high energy barriers separating alternative folds, or metadynamics, where a reaction coordinate is chosen a priori. These methods are stochastic, and one cannot predict in advance what conformations the simulation will explore. In collaboration with M. Baaden at LBT, we have developed a software enabling to visualize a molecular dynamic simulation in real time and to guide it to explore conformations generated by the user in combination with the coarse-grained force-field. The user can select particles to move and the system reacts according to the forces between particles, and he can monitor the energetic changes the molecule undergoes (http://www.baaden.ibpc.fr/umol/ ; https://hirerna.galaxy.ibpc.fr/). Preliminary comparisons between interactive simulations and computer cluster simulations, suggest that the landscape explored with the two techniques is not the same. Interactive simulations can than be a valid way to generate conformations based on the user’s intuition (based also on experimental data) to be further studied by more refined tools. 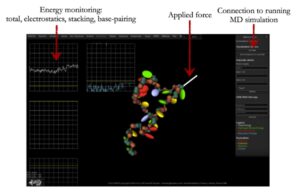 – Modeling of systems of medical and pharmaceutical interest.

Many non-coding RNAs discovered to this date are involved in gene expression regulation through mechanisms that are still largely to be unveiled. Known examples, such as the molecule 7SK, that acts on transcription regulation of the RNA-polymerase II in eucaryotes, form large complexes together with several proteins. Malfunctioning of 7SK complex is linked to developmental diseases and some forms of leukemia. Other examples, such as G-quadruplexes found on DNA chromosomes terminal regions (telomers) and on gene promoting regions, and also formed by single stranded RNA, play a crucial role in the cell’s life cycle. Because of their role in the regulation of apoptosis, stabilization of G-quadruplexes in vivo is considered as a possible target for cancer treatments. These two examples highlight the importance of understanding the mechanism of actions of non-coding nucleic acids and their proteins partners as a major challenge in health science. In collaboration with Anne-Catherine Dock Bregeon we have studied the structure of part of the structure of 7SK. MD atomistic simulations and enhanced sampling simulations have been used to elucidate the peculiarity of the structure determined by crystallography by Dr. Dock-Bregeo and we currently investigating in silico the effects of mutations on the protein binding site of the RNA. In collaboration with J. Sponer we study G-quaruplexes conformational space coupling coarse-grained and atomistic simulations in the attempt of characterizing the molecule’s very slow folding pathways. Thanks to the coarse-grained model we have been able to identify alternative folds and to reproduce for the first time on a computer a complete folding event. 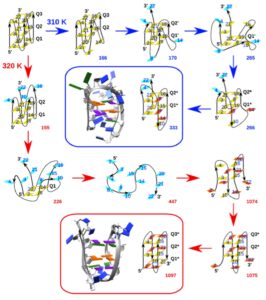 Since 2008 I have been assistant professor in the Biology department of Paris Diderot, and since September of 2016 I am physics professor at Paris Descartes University, in the Pharmacy department. Over the years I have taught and have been in charge of courses in Bioinformatics, mathematical modeling and physics. I have actively developed e-learning (TICES and MOOC), with electronic contents in complement to in-class teaching, as well as a video-game (GIRO-MATH) to help students understand functional analysis and basic calculus. (link) (teaching videos, (link) In collaboration with A. Taly I have also developed an interdisciplinary workshop offered to high school students (funded by the IDEX and Labex Dynamo), which corresponds also to a course to first and second year university students in all sciences. (http://rigole.galaxy.ibpc.fr/)